Here's an update on my (fairly brief) ham radio efforts this week:

QSL - received a much needed card for Sweden on 80m, still have a big batch out that will get me much closer to DXCC on 40m and 80m

6 Meters - Monday a.m. presented some interesting propagation.  In between emails and conference calls, I managed to work 4 new grids, from Minnesota to Ontario to New York.  Two have already confirmed via LOTW, the other is pending, and a card is in the mail to the last one!  PLEASE look into LOTW if you haven't already, let me know if you are having difficulty, it is well worth the effort to get it set up.  This was all single or double hop Es propagation, but signals were strong enough to allow brief discussions, not just grid exchanges.  Grateful to have a late August opening to work.  I'm convinced the band is open a lot more than we know . . . because no one is calling.  If you are around during the day, start looking around sunrise local time on 50.145 for the meteor scatter groups, then move to 50.125 and listen, call, and stir up some activity through the morning.  Who knows what you will work?  While many say it was a slow season, I've added around 10 new grids this summer.

Low Band - not much time for listening this week, so I have no low band activity to report.  I did get my coil built for 80m, see photos below, and will get it installed and tested in the next few days.  That's a 4" ID PVC coupler, with 8 turns of stranded 12 gauge AWG.  It will connect at the base of my S9 43' vertical between the antenna and the LDG Remote Tuner.    I do plan (around thunderstorms, to be on 80m and 40m more in the next couple of weeks.  The Dx season is starting. Sunrise and sunset will be great times, as will local midnight if you can stay awake!

Please send along your operating reports, and let me know what you are working on! 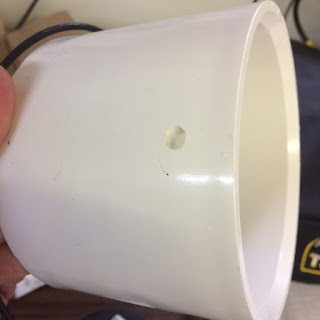 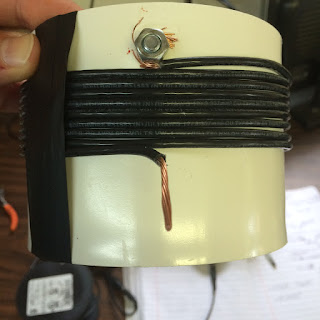